Madonna to direct, co-write film about herself 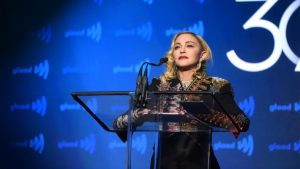 Madonna speaks at the 30th Annual GLAAD Media Awards New York in New York City May 4, 2019. The artist is going to direct and co-write a film about her life. ( Jamie McCarthy/Getty Images for GLAAD)

A biopic about Madonna has found a uniquely qualified director: Madonna herself. Universal Pictures announced Tuesday that the studio is developing an untitled film about the pop star that Madonna will direct and co-write with Juno scribe Diablo Cody. Madonna said she wants the film to convey “the incredible journey that life has taken me on as an artist, a musician, a dancer — a human being, trying to make her way in this world.”

“The focus of this film will always be music,” said Madonna in a statement. “Music has kept me going and art has kept me alive. There are so many untold and inspiring stories and who better to tell it than me. It’s essential to share the roller coaster ride of my life with my voice and vision.”

The film will be produced by Amy Pascal, the former Sony Pictures chief who produced A League of their Own, the 1992 film co-starring Madonna. “This movie is an absolute labour of love for me,” said Pascal. “I have known Madonna since we made A League of Their Own together, and I can’t imagine anything more thrilling than collaborating with her and Diablo on bringing her true-life story to the big screen with Donna (Langley) and our partners at Universal.”

Madonna, 62, previously directed the 2008 British drama Filth and Wisdom and the 2011 period drama W.E., with Abbie Corning and Andrea Riseborough. Madonna, whose last album was 2019’s Madame X, has sold 335 million records worldwide in her career.

Madonna to direct, co-write film about herself

Lusolife Beat is Here At Last